Getting into Debt and the Loss of Friends & Family 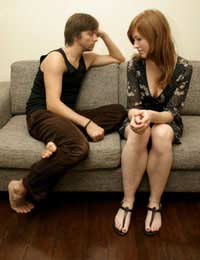 Debt can cause many problems, but one problem that may not immediately be apparent to many people is the loss of friends and family. For most people, friends and family are the ones who will stick by no matter what problems occur during life and financial worries will not alter this. But if debt problems do appear, it can be a testing time for all concerned, especially for the immediate friends and family.

Although it is extremely common for people to be in debt in the UK, many people do feel a sense of shame if they have debt problems. Debt sufferers assume that people will look badly on them if they cannot handle their financial affairs. The assumption that sometimes arises is that if the person in debt cannot handle their financial affairs how can they manage to handle other areas of their life?

Debt is a problem that can reach all areas of a person’s life. It can lead to stress, depression, absenteeism from work, broken relationships, alcohol and drug abuse, and isolation. With the advent of debt, a person who was once a sociable and happy person can become withdrawn, irritable and depressed. The warning signs to the change in a person’s personality can all be apparent but it will sometimes only be close friends and family who can broach the subject.

Loss of Friends and Family

Hopefully a person who is suffering from debt will have friends and family who will be supportive and will not disappear during this difficult time. However the person in debt may become aware that certain friends are not as readily available as they once were. This could be down to a number of factors.

Friends may feel awkward or hesitant when issuing invitations if they know that the planned event will be financially costly to the person in debt. For instance skiing weekends away or invitations to dinners at an expensive restaurant may not be as forthcoming as they once were. A true friend will realise that the debt situation should only be temporary and should find other ways for social events such as dinner invitations at home.

Keeping up with the Jones

It is a fact that many people have found themselves in debt simply due to their lifestyles. If one set of friends earns more than another, then trying to keep up appearances by juggling credit cards will only lead to long term debt problems. This is a common problem with people who graduate university and leave friends behind. University graduates can usually expect to earn higher salaries and have more expendable income than those who have settled down early and raised a family.

True friends should be able to communicate with each other, although many will find the subject of finances and salaries hard to talk about. It is a fact of life that people will change friends and social circles during the course of their lives. These changes may sometimes be based on financial reasons such as holidays abroad and work colleagues with similar salaries and lifestyles. But for many people a friend will be a friend no matter how much or how little they earn.

Borrowing Money from Family and Friends

Borrowing from family or friends can lead to huge rifts, and many arguments have been caused by this type of borrowing. However, with escalating house prices many young people who are trying to get a foot on the property ladder have no option but to borrow money from parents and this has become quite common. For a lot of people the borrowing of money from family and friends is simply something that would not occur either through a sense of pride or through the repercussions that may occur.

If this type of borrowing is considered then it would be wise to have some sort of repayment plan in place. A short term loan to help pay off debts quickly may be acceptable as long as there is some form of guarantee of repayment. A person that is consistently in debt would be wise to avoid this form of borrowing as it can easily bring about the loss of family and friends.

Serious debt problems can have a knock on effect towards all areas of a person’s life. The loss of friends and family should not go hand in hand with debt problems. If the debt sufferer is honest and truthful about their problems to their friends and family then this should be reciprocated, and hopefully much needed emotional support will be given when it is needed the most.