Home > Results Of Debt > How Debt Can Affect Your Health 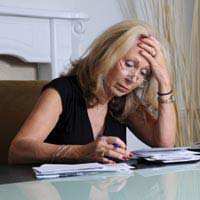 When debts become a serious problem it’s not only financial stability that suffers. Debt worries can have a significant impact on health and wellbeing, both mentally and physically.

Debts Can Become a Symptom of Illness

Medical experts agree that worrying about debt can lead to illness. The term ‘worried sick over debts’ is not just a saying, it is a reality that affects thousands of debtors in the UK. Debt stress can lead to physical and mental illness that can strike without warning. Doctors have reported rising levels in debt-related illness due to the recent credit crunch. It seems that eliminating debts may be one of the only ways to help alleviate this type of illness.

Debt related stress can be the cause of a number of health problems. Anxiety, back pain and migraines are three of the most common health complaints. Depression and ulcers are also known to be associated with debt stress. Doctors have also reported a rise in patient health problems such as weight gain, mood swings and digestive disorders with debt stress being a common factor. Constant sleeplessness due to worrying over debts can also leave people run down, stressed and prone to mood swings.

The Knock-On Effect of Debt Stress

Serious debts can in themselves be a vicious circle, and this circle can also extend to debt-related health problems. Stress is a major factor in alcohol and narcotic dependency with people self-medicating to relieve their worries. This can then lead to time off work and in the worst case scenario many people have lost employment due to absenteeism. There have been reports of people actually suffering strokes and heart attacks due to the long term stresses caused by money worries.

Debt related stress can hit at any age as more people achieve high levels of debt earlier in their lives. Students and young people are prone to living beyond their means and succumbing to the easy cash provided by credit cards and loans. Students are also leaving their university courses laden with debt and taking low paying jobs just to make ends meet. More retirees than ever before are living on the poverty line in the UK and relying on credit well into their golden years. The stresses and ill health connected to debt does not pertain to any one age group.

Many people in serious debt can become depressed but mild depression can be just the tip of the iceberg. Becoming depressed over debts is a normal reaction, and if the debt problem is alleviated then depression will usually disappear. But constant harassment from debt collectors, threats of losing a home and bankruptcy have led to more serious consequences. The media have reported numerous cases of debtors taking their own lives over mounting debt problems. Some people can handle debt pressures but for others depression can take over their lives and suicide can seem like the only option.

Spotting the Signs of Depression

The person affected by depression may not actually notice the signs creeping up but these signs may be apparent to family and friends. People who are suffering may not want to talk about their problems and may begin to become reclusive. They may also start taking time off work and be prone to mood swings and irritability. It may also be the case that those suffering from depression will lose or gain weight rapidly and may turn to alcohol or drugs. They may also complain about unexplained aches and pains such as headaches, stomach pains and back pains.

Advising people not to worry themselves sick over debt will not alleviate the financial pressures that can lead to ill health. One of the major problems with serious debt is that people have a tendency to let it control their lives and can see no way out. Obtaining help from agencies such as the Citizen’s Advice and the Consumer Credit Counselling Service will help to alleviate debt stress. Taking this first small step is one of the best ways to regain financial control and to lighten debt and debt-related stress problems. Health complaints can simply be a symptom of debt stress that may disappear once debts are under control.

How to Cope When Baliffs Arrive