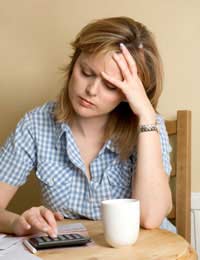 Purchases using credit are often referred to as buying on the never never. For those with a large amount of debt it can seem never ending; continually borrowing from Peter to Paul. Avoiding never ending debt should not be a choice; it should be the only option for those who find controlling their debts to be a serious problem.

For some people debt is a necessity and is a way of making ends meet throughout the month. Others simply use credit as a way to purchase good instantly without the need to save or use the cash that they already have. Whatever the reason the end result is usually always the same. A large percentage of credit customers will end up paying excessive amounts over the actual purchase price of the goods.

Debt and interest can mount up very quickly without the customer actually being aware until the credit limits are exceeded. This is where the never ending debt process kicks in and the light at the end of tunnel grows dimmer.

Around two million people in the UK have borrowed so much money that they will never be debt free. Debt collection is a booming business and bankruptcies and house repossessions are at a record level. Living beyond your means in the UK is not regarded by most borrowers as a serious problem; it is simply a way to get by. Borrowers view interest payments, late payment charges and penalties as an inconvenience rather that a serious problem. This way of viewing debt is similar to hiding your head in the sand as someone takes a large chunk of your monthly wages.

Wake up to Never Ending Debt

Debt can be a hard problem to tackle, especially for those with a mindset that exists on the buy now pay later syndrome. Breaking this cycle can mean rebooting your mind’s way of thinking towards debt and credit. Some debts are unavoidable such as debts to further education or obtaining a mortgage. But people who buy everything on credit cards need to wake up and realise that they are losing money rather relieving the burden from their monthly salaries.

Take a look at those monthly statements and ask yourself how long have you been paying for that fridge-freezer that is almost past its sell by date. How much have you actually paid for that couch that arrived years ago and yet still isn’t paid off? There are a number of ways to avoid never ending debts but it does mean a change in attitude. Ways to avoid never ending debts should include:

The government claims there is a need for high interest lenders, which is why they will not crack down on what are basically legalised loan sharks. Anyone who wants to become debt free should avoid high interest loans and credit. These lenders are the easiest way to become burdened with never ending debts and mounting interest rates. Avoiding no credit check lenders will be beneficial for both your bank balance and peace of mind.

A life without serious debt is not an impossible task. Anyone can achieve this goal by being financially aware and not succumbing to the buy now pay later syndrome. It is never too late to start clearing off those debts that never seem to end. Even if it means a few years of extra work the end result will be worth the effort. Less debt means more money in your pocket and the elimination of tiresome creditors from your life.

Get Rid of Christmas Debts Quickly

The Pitfalls of Buying White Goods on Credit